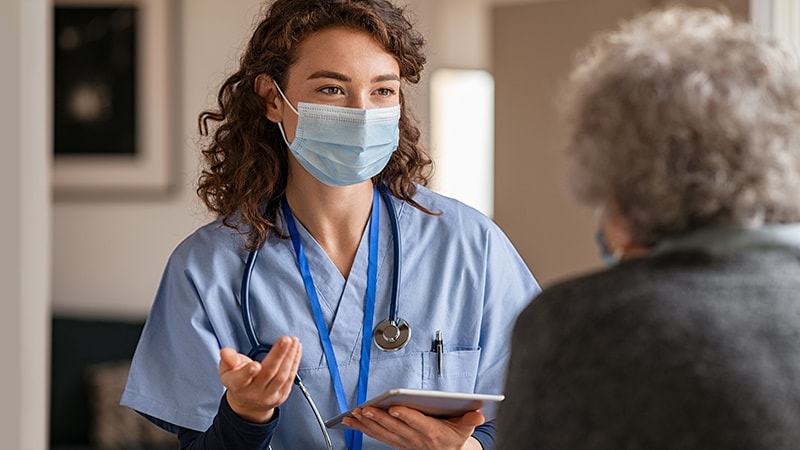 A new tool for predicting the risk of severe chemotherapy toxicity in older adults with early-stage breast cancer outperforms existing models and should help older patients and physicians make treatment decisions with more confidence, according to investigators.

They devised and tested the tool, called the Cancer and Aging Research Group–Breast Cancer (CARG-BC) score, in two cohorts of patients aged 65 years or older with stage I-III breast cancer.

The area under the curve for predicting grade 3-5 toxicity was 0.75 in the development cohort and 0.69 in the validation cohort, for a combined AUC of 0.73.

Allison Magnuson, DO, of the University of Rochester (N.Y.), and colleagues described these results in the Journal of Clinical Oncology.

To calculate a patient’s CARG-BC score, the researchers added up points assigned to eight independent predictors of grade 3-5 chemotherapy toxicity:

There were 283 patients in the development cohort and 190 in the validation cohort. There were no significant demographic, disease, or treatment differences between the cohorts.

Overall, about a quarter of patients had an unplanned dose reduction (24%), dose delay (26%), stopped treatment early (24%), or were hospitalized during treatment (23%). All of these occurrences were more likely in intermediate- and high-risk patients versus low-risk patients (P < .001).

In the validation cohort, grade 3-5 toxicity rates were 27% in the low-risk group, 45% in the intermediate-risk group, and 76% in the high-risk group.

This study had its limitations, including that a majority of subjects (72.2%) had a college education, and the validation cohort was accrued from the same 16 institutions as the development cohort.

“Further validation in a more diverse population should be considered,” the investigators wrote.

A “Useful” Tool for Guiding Therapy

The investigators noted that chemotherapy is a complex decision for older adults with stage I-III breast cancer. While it may be indicated, chemotherapy is underused often because of the higher risk of severe toxicity in older people.

“Unfortunately, older adults aged 65 and over, who comprise about half of all breast cancer diagnoses, are significantly less likely to be offered chemotherapy compared to younger patients – sometimes because their doctors fear they won’t be able to tolerate it,” investigator Mina Sedrak, MD, of City of Hope National Medical Center in Duarte, Calif., said in a press release.

The CARG-BC score may be useful to direct therapy in older adults with early-stage breast cancer, the investigators wrote. They noted that intensifying supportive care and developing modified treatment regimens may be appropriate for patients at higher risk for toxicity.

“Although this score should not be used as the only factor in deciding whether to administer and/or alter the dose or schedule of chemotherapy, the CARG-BC score can be used to facilitate this complex decision-making process, along with clinical judgment and patient preferences,” they wrote.

“I think this is a great tool. [It] will be helpful to me to have a more accurate conversation with geriatric patients about the actual risk/benefit ratio for chemotherapy in early breast cancer,” said Amy Tiersten, MD, of Mount Sinai Hospital in New York, when asked for comment.

“If routinely implemented, it may help reduce age bias and also identify older patients who may look well but may be vulnerable and quickly decompensate while undergoing treatment,” said Lidia Schapira, MD, of Stanford (Calif.) University. “Importantly, it can be used to guide conversations about trade-offs and to start a frank conversation about an older patient’s fears and concerns about treatment.”

This research was funded by the National Institute on Aging, the Breast Cancer Research Foundation, and the Center for Cancer and Aging at City of Hope. The investigators, Schapira, and Tiersten had no relevant disclosures.

Novavax cuts 2022 revenue guidance in half, stock tanks in after-hours trading
Large Study Confirms COVID Vaccines Safe for Pregnant Women
Updated Covid-19 boosters are expected in September. Will it be too late?
Man Loses Ability To Walk After Excessive Vitamin B6 Intake: Report
Could There Be a Vaccine for Type 1 Diabetes?