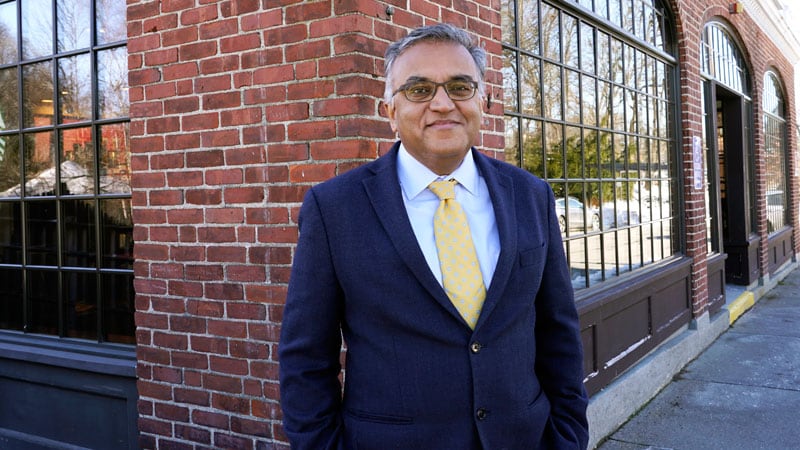 BOSTON (AP) — Dr. Ashish Jha started 2020 thousands of miles from home, taking a sabbatical in Europe from his academic post at Harvard. Then the coronavirus pandemic arrived in the U.S. 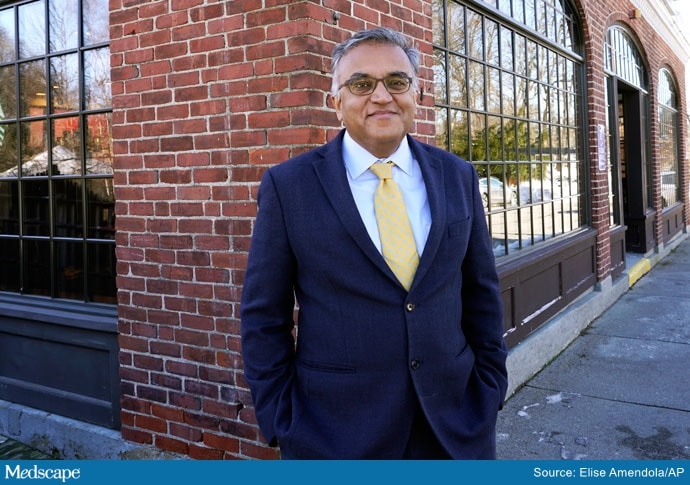 Dr. Ashish Jha, dean of Brown University’s School of Public Health, stands for a portrait, Wednesday, Dec. 23, 2020, in Newton, Mass. In another time, experts like Jha would have enjoyed the esteem, respect and relative obscurity afforded by academia. But for better or worse, COVID-19 thrust virologists, epidemiologists and other normally low-profile scientists into the pop culture crucible this year.

Jha, an expert on pandemic preparedness, returned to Massachusetts, and his blunt talk on the unfolding disaster was soon hard to miss on national news and social media.

Jha estimates his office fielded more than 100 media requests a day at its peak. He went from a few hundred Twitter followers pre-pandemic to more than 130,000 by December.

“For me, the purpose of doing this was to fill a void and make sure people received credible scientific information,” said Jha, who recently became dean of Brown University’s School of Public Health in Providence, Rhode Island. “I thought it would go for a week or two, but the demand never really let up.”

In another time, experts like Jha would have enjoyed the quiet esteem, respect and relative obscurity afforded by academia. But for better or worse, the coronavirus pandemic thrust virologists, epidemiologists and other normally low-profile scientists into the pop culture crucible.

Dr. Anthony Fauci, the director of the National Institute of Allergy and Infectious Diseases and a leading member of President Donald Trump’s coronavirus task force, has been the unquestionable rock star among them. But a cadre of other scientists also rose to prominence this year. Many developed loyal social media followings and became regulars on the cable news circuit.

For Dr. Angela Rasmussen, a Seattle-based virologist affiliated with Georgetown University in Washington, her newfound notoriety hit home in July when she got into a Twitter debate with billionaire Elon Musk. 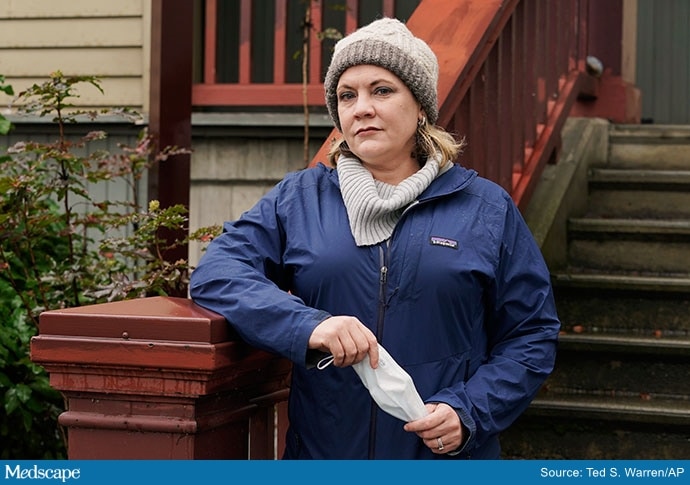 Angela Rasmussen, a Seattle-based virus researcher affiliated with Georgetown University in Washington, D.C., poses for a photo, Wednesday, Dec. 30, 2020, at a school near her home in Seattle. In another time, experts like Rasmussen would have enjoyed the esteem, respect and relative obscurity afforded by academia. But for better or worse, COVID-19 has thrust virologists, epidemiologists and other normally low-profile scientists into the pop culture crucible this year.

Rasmussen, who was then at Columbia University, criticized the Tesla CEO’s tweets questioning data on the spread of the virus. Musk, to her surprise, chimed in, challenging her to produce evidence supporting her arguments.

Rasmussen tweeted back a series of graphs and other scientific data, which Musk dismissed as “cherry-picked.” Twitter users following along slammed Musk for attempting to “mansplain” the pandemic to a virologist.

Rasmussen, who has seen her Twitter followers explode from around 300 pre-pandemic to more than 180,000, said she’d like to avoid unnecessary Twitter beefs, which also included testy exchanges with “Dilbert” comic strip creator Scott Adams and his fans over the pandemic in recent months.

But as the pandemic has worn on, she has become frustrated with the persistent misinformation from influential leaders and celebrities like Musk and Adams, and her strongly worded tweets show it.

“It’s exhausting,” Rasmussen said. “The same arguments keep coming back. It’s like battling a hydra. Every time you cut one head off, another one grows back in place.”

Laurel Bristow, an infectious disease researcher at Emory University in Atlanta, suggests it’s an indictment of academia that misinformation and conspiracy theories thrive and that parts of American society remain deeply skeptical of true scientific work. 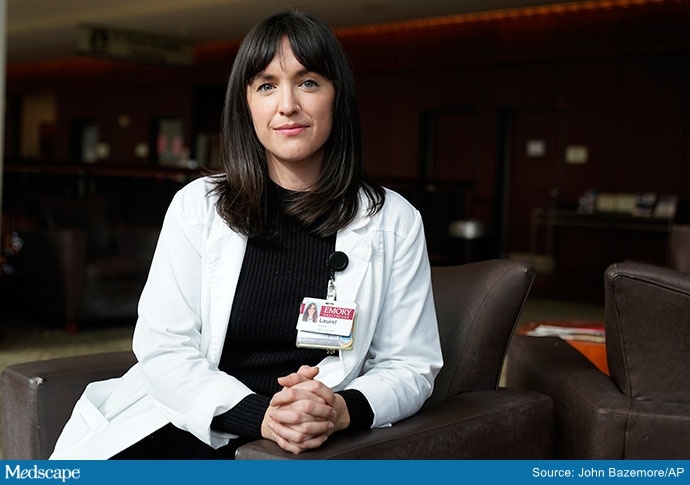 Infectious disease researcher Laurel Bristow poses at Emory Midtown Hospital in Atlanta, Wednesday, Dec. 23, 2020. In another time, experts like Bristow would have enjoyed the esteem, respect and relative obscurity afforded by academia. But for better or worse, COVID-19 thrust virologists, epidemiologists and other normally low-profile scientists into the pop culture crucible this year.

“Experts in these fields have ignored the importance of communication and bringing information to people in a way that is understandable and relatable for so long,” Bristow said. “You have to put a face to something for people to be able to trust it.”

Bristow, 32, whose Instagram username is kinggutterbaby, has gained more than 300,000 followers posting videos answering people’s questions and concerns about COVID-19.

She credits her online popularity to her unfussy approach. She shoots her short videos speaking directly at the camera while sitting in her kitchen.

It also helps, Bristow said, that her Instagram feed is filled with pictures of her posing with cuddly animals, riding motorcycles and other things from her daily life.

“Having people see me as a whole person helps remind them scientists are people with families too, and that the best interest of people is really at the heart of what we’re doing,” she said.

Dr. Akiko Iwasaki, an immunobiology professor at Yale University in New Haven, Connecticut, said she has sought interviews with conservative media outlets as a way to combat fear and misinformation, especially with the nationwide vaccine rollout underway. 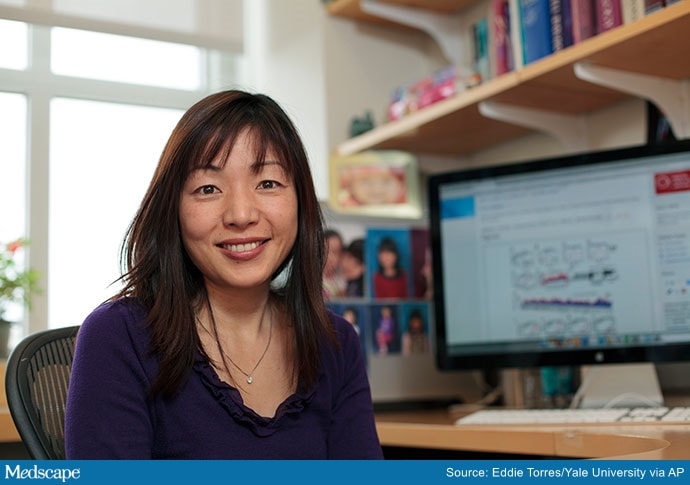 Akiko Iwasaki, professor of immunobiology at the school in New Haven, Conn. Iwasaki has increasingly been seeking media interviews to confront fear and misinformation, especially as the nationwide coronavirus vaccine rollout is underway.

“There’s such a divide in society. I’d really like to reach the other side and make a difference,” said Iwasaki, who was already a notable advocate of women in science and tech fields before the pandemic but has seen her Twitter following swell to more than 90,000 this year.

Like other female scientists, she said that she has encountered frequent misogyny and “mansplaining,” but that it has only made her more determined to continue speaking up.

“I have this platform, and I’m going to use it,” said Iwasaki. “My priority is to get out the correct information, not respond to toxic comments.”

Jha, meanwhile, admitted he wasn’t prepared for the level of racial animus his pandemic commentary has generated — a complaint shared by other scientists of color.

A native of India who has lived in the U.S. since the 1980s, he said much of it is of the “go back to your country” variety that he simply shrugs off.

But a gut check moment came in November, when Jha began receiving death threats after testifying before Congress and strongly rejecting assertions made by Trump and others that the anti-malaria drug hydroxychloroquine could also protect people against COVID-19.

Jha said the threats were concerning enough that he notified local police, who sent patrols past his family’s Boston-area home as a precaution.

Now, as 2021 dawns, he said he is looking forward to being less in the public glare.

When President-elect Joe Biden takes office, Jha said, he expects federal government authorities will take their rightful role as the public face of the nation’s pandemic response, after being diminished and undermined at critical times this year.

“That’s who the American public needs to be hearing from more,” he said, referring to the Centers for Disease Control and Prevention and experts like Fauci at other federal agencies. “I’m a poor substitute for what’s needed.”

Two More Patients With HIV Surviving Without Antiretrovirals
Science Matters with Monica Colaiacovo: Unraveling answers
Is That Monkeypox?
US Clears 786,000 Monkeypox Vaccine Doses for Distribution
At Least 27M With COVID May Have Long-term Loss of Smell, Taste