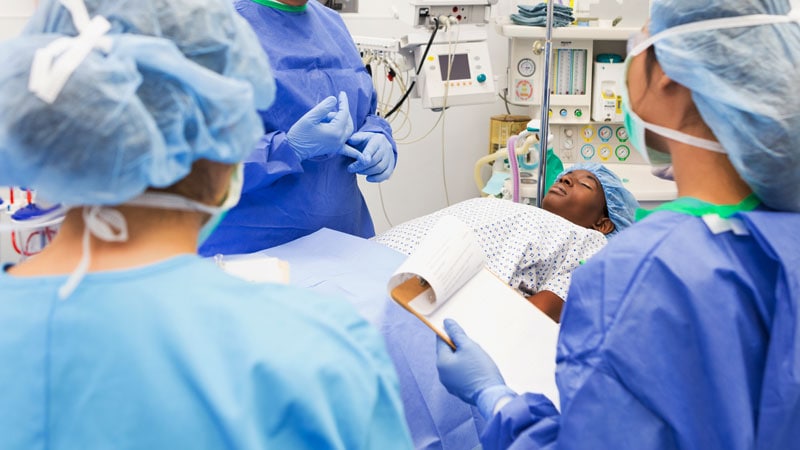 The practice of medical students giving unconsented pelvic exams to women patients under anesthesia seems to be continuing, although recent new laws aim to change the situation. 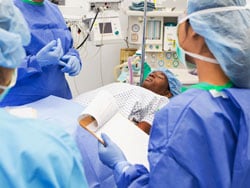 “When I was doing Ob/gyn as a med student, the attending would have me do a pelvic right after the patient was under and before we started surgery,” said one participant in an online forum. “We didn’t exactly get permission but it was for teaching purposes.”

Yet others don’t see what the commotion is about. “There are a hundred things that are done during a surgery that don’t require your specific consent (some of them much more ‘humiliating’ than a pelvic exam…there’s not really much left to be shy about during a gyn/rectal/prostate surgery, let me put it that way),” one doctor wrote.

However, many physicians are adamantly opposed to the practice, and laws intended to stop or limit it are being enacted throughout the nation.

A few states have required consent for pelvic exams for many years, beginning with California in 2003. But up until 2019, providing pelvic exams without informed consent was illegal in only six states.

Continuing reports of unauthorized pelvic exams indicate that the practice has not disappeared. University of Michigan professor Maya M. Hammoud, MD, past president of the Association of Professors of Gynecology and Obstetrics (APGO), and many others attribute renewed interest in the issue to a 2018 article in the journal Bioethics by Phoebe Friesen, a medical ethicist at McGill University in Montreal, Canada, that laid out the ethical arguments against the practice.

Starting in 2019, an outpouring of new state bills have been introduced, and nine more states have passed laws. In addition, 14 other states considered similar bills but did not pass them, in some cases because teaching institutions argued that they were already dealing with the issue. This happened in Connecticut and Massachusetts, after representatives of Yale Medical School met with legislators.

Laws against the practice have been passed by 15 states, including California, New York, Florida, and Illinois. Some teaching institutions have recently been clamping down on the practice, while many teaching physicians insist that at this point, it has all but ended.

A Practice That May Still Continue

For many years, ethicists, women’s rights groups, state legislators, and organized medicine have been trying to eliminate the practice of unauthorized pelvic exams by medical students. Several key medical groups have come out against it, including the American Medical Association (AMA), the Association of American Medical Colleges (AAMC), and the American College of Obstetricians and Gynecologists (ACOG).

“Fifteen years ago, studies found a substantial number of cases, but my sense is that most of that has stopped,” says Hammoud.

Yet despite these changes, there are some disturbing signs that the practice persists.

“I don’t have data, but anecdotally I see it still going on,” says Peter Ubel, MD, a professor at Duke University, Durham, North Carolina, who was involved in one of those early studies. “Every so often when I’m making a speech, a medical student tells me about performing a pelvic exam without getting permission.

“Perhaps in some cases the attending [physician] did get permission and didn’t tell the medical student, but that would also be a problem,” Ubel says. “The medical student should be informed that permission was given. This helps them be sensitive to the need to get consent.”

In a 2019 survey of medical students, 92% said they performed a pelvic exam on an anesthetized female patient, and of those, 61% did so without explicit patient consent.

“I tried to opt out once from doing a pelvic exam when I hadn’t met the patient beforehand,” one of them wrote. “The resident told me no.”

Some Physicians Defend the Practice

Why do many medical students and doctors think that getting consent for pelvic exams is not necessary?

Some argue that patients implicitly give consent when they walk through the doors of a teaching hospital. “Sorry, but you INHERENTLY agree to that when you’re seen in an academic teaching hospital,” wrote one participant in a Student Doctor Network forum. “You agree to have residents and medical students participate in your care, not just an attending. If you just want an attending, then you are free to go to a non-teaching hospital. That’s the deal.”

Others argue that since the anesthetized patient couldn’t feel what was going on, it shouldn’t matter. “Things like pelvic exams, rectal exams, or even heroic trauma surgery occur for training purposes when there is no memory, no sensation and no harm to be done [and] society gains a better practitioner of the art of medicine,” a physician in Columbus, Ohio wrote on Quora, an online forum.

Some doctors argue that they don’t ask for specific consent when they touch a variety of other body parts, and pelvic exams should be no different. Pelvic exams are needed before surgery of the pelvic area, but they have also been given to women undergoing surgery in a different part of the body.

In 2019 a woman told Deseret News in Utah that she had been recovering from stomach surgery when a resident physician mentioned something she had noticed “when we looked at your cervix.” When she asked why the physician had examined her cervix to prepare for stomach surgery, “no one could give her a good answer.”

What is missing in many defenses of the practice is any recognition that genitals are the most intimate part of the body, and that a patient’s desire for privacy ought to come first. In a survey of women undergoing gynecologic surgery, 72% expected to be asked for consent before medical students undertook pelvic examinations under anesthesia.

Adashi says the principle of patient autonomy in medical ethics directs that patients must be involved in decision-making about their care — even when caretakers are pursuing a positive goal, such as helping to educate future doctors.

“Conducting pelvic exams on unconscious women without their specific consent is simply untenable and never has been tenable, and it ought to be discontinued if it hasn’t been already,” says Adashi, who wrote an opinion piece on the issue for the Journal of the American Medical Association.

Furthermore, it has been shown that ignoring the need to get consent for pelvic exams makes physicians less concerned about getting patient consent in general. A study led by Ubel found that medical students who had completed an ob/gyn clerkship thought getting patients’ consent was significantly less important than those who had not completed that clerkship.

Why Give Pelvic Exams to Anesthetized Women?

Despite the controversy, a number of medical educators continue to direct medical students to perform pelvic exams on anesthetized women. Why is that?

“Pelvic exams are not easy to do,” Hammoud says. “Learners need to keep working on them; they have to do a lot of them in order to do them well.”

To teach pelvic exams, most medical schools provide standardized patients — paid volunteers who submit to exams and critique the medical student’s work afterwards — but these encounters are limited because of their cost, says Guy Benrubi, MD, professor and emeritus chair of the Department of Obstetrics and Gynecology at the University of Florida College of Medicine, Jacksonville.

He says teaching programs therefore need to supplement exams on standardized patients with exams on unpaid volunteers who provide consent. Programs prefer anesthetized patients, Benrubi says, because they are easier for novices to work on. “With patients under anesthesia, the muscles are relaxed and it’s easier for learners to detect organs,” he says. “All the same, you need to get consent.”

Faced with growing opposition to pelvic exams without consent, teaching institutions as well as gynecologic educators have recently been tightening their policies.

University of Michigan’s Hammoud says she has always informed patients orally about the possibility of medical students performing pelvic exams on them, but now some institutions, including her own, want a more involved process. The university recently began consent in writing for pelvic exams.

Hammoud says some institutions now require a separate consent form for pelvic exams, but the University of Michigan simply directs that the possibility of the patient getting a pelvic exam be part of the consent form.

This requirement, called “explicit consent,” was endorsed by APGO. It differs from having a separate consent form for pelvic exams, which would highlight the possibility of a pelvic exam, as many women’s rights activists are calling for.

Why not have a separate form? Hammoud is concerned that it would unnecessarily alarm patients. “When you point out a certain issue, you’re in effect saying to the patient that this is not normal,” she says. She notes that when asked for consent to do the exams, most women agree to it.

Hammoud thinks the laws are unnecessary. “These laws are excessive for the vast majority of physicians who practice ethically,” she says. “The profession should come up with its own standards rather than having a plethora of laws.”

Several of the more recent laws have a broader scope than the original laws. The original laws simply state that medical students or physicians must get informed consent, but they did not stipulate how informed consent should be obtained. (The laws also typically prohibit pelvic exams when surgery will be in a different area of the body.)

The new laws often follow this format, but some go well beyond it. Some also apply to rectal exams (Maine and Maryland), to men as well as women (Utah and Maryland) requires separate consent (Utah), and require consent for all pelvic exams (Florida).

The Struggle Over Florida’s Law

The original Florida bill was drafted in 2019 by State Sen. Lauren Book, a Democrat who is a victims’ rights advocate working with women who have undergone sexual trauma. In written comments for this article, she says not getting consent for pelvic exams is still going on.

“This disturbing practice is commonplace at medical schools and teaching hospitals across the country — including several Florida universities, based on accounts from current and former medical students and faculty,” Book states. “At best, these exams have been wrongful learning experiences for medical students or at worst, the equivalent of a sexual assault.”

Ubel takes exception to linking the teaching activities to sexual assault. “I understand why many women would be horrified by this practice, but it’s not as bad as it seems,” he says. “There is nothing sexual or prurient about these exams, and they are motivated purely by a desire to teach people to be better doctors. That said, patients have the right to say, ‘I don’t want it done to me.’ “

In early 2020, Benrubi was part of a coalition of medical groups that was trying to influence Book’s bill as it went through the legislature. Book’s original bill was relatively mild, “but then, late in the process, it was changed into a more sweeping bill with some unclear language,” he says.

The final version was passed and signed into law by Gov. Ron DeSantis, a conservative Republican, in June.

Benrubi says a large number of state legislators, including Book, have been agreeable to fixing the bill. This was supposed to happen in a special session in the fall, but that never materialized, and so the fix will have to wait until the regular session in early 2021.

But while organized medicine wants to walk back the law, Book wants to expand it. “This upcoming session, I look forward to working with physicians to continue to hone this new law, and to work toward inclusion for males,” Book writes. “EVERYONE has a right to consent.”

Pfizer says omicron booster is better against new subvariants like BQ.1.1 than old shots
Science Matters with Anne Becker: Inspired by voices around the world
Bird flu is threatening British food staples, from the English breakfast to Christmas dinner
The Right Indoor Relative Humidity Could Ward Off COVID
Caregiving for Caregivers