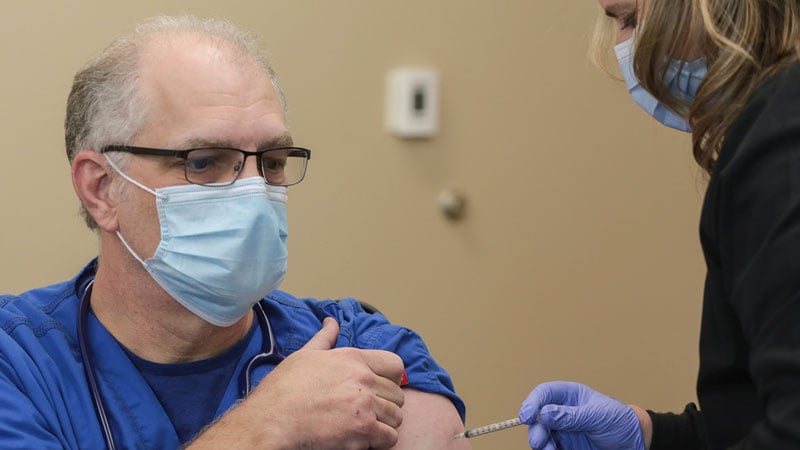 Stanford Medicine issued an apology on Twitter Friday after protesters blasted its vaccine distribution plan that left out nearly all of its residents and fellows, many of whom treat COVID-19 patients. But some say the error shows the residents’ need for better representation and advocacy.

While only seven of Stanford’s more than 1300 residents were initially chosen to get the vaccine, many workers who lack direct contact with sick patients received some of the first 5000 doses, according to The New York Times ,

A Stanford resident was shown in a San Francisco Chronicle video, saying that although the protest was organized by the residents, they and others were also fighting back for the fellows and nurses who were left off the list.

“It’s not just about the residents. The people you see here are all residents because we’re close and it was easy for us to gather all of our programs,” but he mentioned that some in other groups, including some pediatric nurses and respiratory therapists, were overlooked as well.

“Residents Can Die Too”

Protesters carried signs saying, “Lack of Priority,” “Help me help my patients,” “Frontline and Forgotten” and “Residents can die too.”

According to NPR, a council of the chief residents sent a letter to Stanford’s leaders on Thursday night expressing anger at the allocation plan.

On Friday, Stanford deans and executives emailed staff an apology: “We are writing to acknowledge the significant concerns expressed by our community regarding the development and execution of our vaccine distribution plan. We take complete responsibility and profusely apologize to all of you. We fully recognize we should have acted more swiftly to address the errors that resulted in an outcome we did not anticipate,” they wrote.

“We are working quickly to address the flaws in our plan and develop a revised version.”

Stanford did not respond by publication time to Medscape Medical News’ questions about how the revised plan would look.

The apology noted that more people would get access to the vaccine with the next shipment of vials, which they expected to arrive this week.

Carrie Rassbach, MD, director of the Pediatrics Residency Program at Stanford, said others in the meantime are stepping up.

“The Dept of Peds Chair, Division Chiefs, Associate Chairs, educational leaders and others who are not high risk have offered to wait until all clinically-facing housestaff have been offered vaccination,” she wrote on Twitter.

The New York Times, which obtained a copy of the memo about the selection process, reported that the flawed plan was designed by researchers and ethicists and the goal was to assign a risk score with an algorithm for hospital personnel that would calculate highest risk of getting the virus and becoming seriously ill, using factors such as age, job description, and number of COVID-19 cases detected in the person’s department.

Residents, who are typically younger and work in many departments, moved down the list.

The Times reported that hospital administrators were supposed to review the list the algorithm generated, but the memo revealed that did not happen because of the quick generation of the list and frenetic communications flying among overwhelmed administrators.

Janis Orlowski, MD, chief health care officer for the Association of American Medical Colleges, told Medscape Medical News the Stanford glitch was not something they had anticipated when the AAMC sent guidance to medical institutions a week before the Pfizer vaccine came out.

She said she thought medical students would have been the group the organization would have to advocate for to get the early vaccines, not the residents. She and others expected residents would surely be recognized as essential frontline workers and prioritized for the vaccine.

“We sent a note out saying that medical students, like residents and physicians — if they were in a clinical rotation — should be considered essential workers and should be vaccinated as other individuals in their cohort,” Orlowski said.

She said she has not heard about similar problems with the vaccine rollout at other institutions and that the Stanford problem appeared to be an “unfortunate” event — “good people trying to do the right thing and it was a misfire.”

Maximilian Cruz, MD, a fourth-year resident in Ohio, told Medscape Medical News that although he didn’t think the omission of residents from Stanford’s first vaccination phase was intentional, he said it reflects a larger issue: “residents’ lack of representation.”

He said, “It is the same reason residents across the nation have mediocre benefits at best — 401K matching is a pipe dream for most — sorrowful maternity leave and usually nonexistent paternity leave, largely stagnant wages since the ’60s when adjusted for inflation, etc.”

“I believe that the Stanford residents protesting — in a way that ensured continued safe patient care — was justified, and helped bring about the quick response by leadership,” said Cruz, who is the current president of the National Med-Peds Residents’ Association; he emphasized his views on the matter are his alone.

Cruz pointed to the myriad inequities in healthcare the pandemic has highlighted.

“The lack of representation and power that residents have in workplace decisions that directly impact them can be added to that list,” he said.

Marcia Frellick is a freelance journalist based in Chicago. She has previously written for the Chicago Tribune, Science News and Nurse.com and was an editor at the Chicago Sun-Times, the Cincinnati Enquirer, and the St. Cloud (Minnesota) Times. Follow her on Twitter at @mfrellick