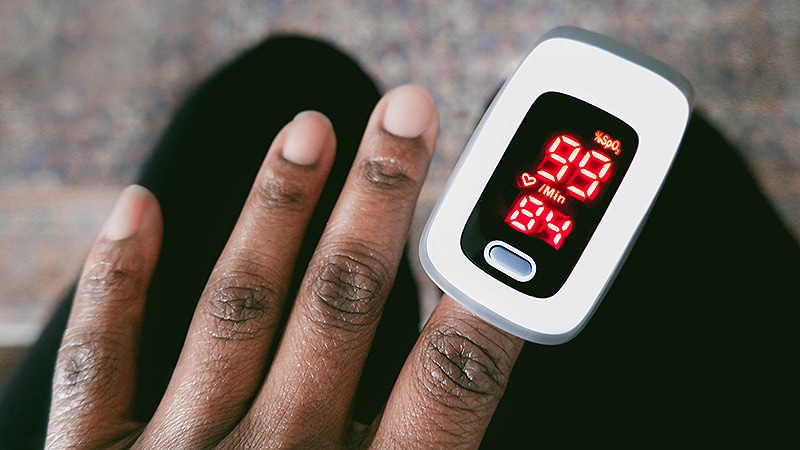 “The rate of occult hypoxemia — arterial blood oxygen saturation less than 88% despite a pulse oximetry reading greater than 92% — was significantly higher in patients with self-reported Black or Hispanic race or ethnicity compared to those of self-reported White race or ethnicity,” senior study author Matthew A. Levin, MD, told Medscape Medical News.

“Clinicians expect the pulse oximeter to be highly accurate. While the device’s bias due to limitations of physics and measurement is known, it is not commonly appreciated,” added Levin, professor of anesthesiology, perioperative and pain medicine, and of genetics and genomics, at the Mount Sinai Health System in New York City.

Pulse oximetry is part of the American Society of Anesthesiologists’ Standards for Basic Anesthetic Monitoring, yet darker skin has been linked with elevated pulse oximeter values. And a recent article, published in the New England Journal of Medicine, has questioned the accuracy of pulse oximetry in detecting hypoxemia in patients with darker skin.

But “this issue had not been looked at in the perioperative setting,” said Levin.

Pulse oximetry values can help determine optimal time for breathing tube removal at the end of surgery, and whether the patient goes from surgery to a critical care unit, a recovery room, or home.

As reported in the journal Anesthesiology, Levin and colleagues at Mount Sinai examined the electronic records of all patients at one medical center who had undergone anesthesia for surgery and whose records contained at least one arterial blood gas (ABG) during surgery between 2008 and 2019.

In paired SaO2 –SpO2 readings, the prevalence of occult hypoxemia was significantly higher in Black (2.1%) and Hispanic (1.8%) patients than in White patients (1.1%), even after adjusting for other patient factors (P < .001 for both).

This is another example of a racial disparity in patient care.
Dr Angela Christine Argento, Johns Hopkins Medicine

Angela Christine Argento, MD, associate professor of pulmonary and respiratory medicine and director of bronchoscopy at Johns Hopkins Medicine in Baltimore, Maryland, was surprised by the degree of inaccuracy the study found in pulse oximetry in Black and Hispanic patients.

“While 2% of patients doesn’t seem like a lot, using pulse oximetry on every patient undergoing anesthesia or sedation puts many people at risk for occult hypoxemia,” Argento, who was not involved in the study, told Medscape Medical News.

“We clinicians need to be aware of these findings so we can be vigilant and thoughtful when caring for this group of patients in order to keep them safe,” she said in an email. “Low oxygen levels can lead to some significant problems.

“This is another example of a racial disparity in patient care. We need to continue to move toward precision medicine. We need to identify safe parameters to use with these patients or develop better technology that is not limited by skin tone.”

The field of medicine is making strong efforts to address bias against various groups of people and to provide everyone with the same quality of care regardless of their race or ethnicity, Levin said.

“We can do better at ensuring that everyone gets the same level of care in the operating room,” he added. “When we’re caring for non-White patients, we need to be aware of the potential bias inherent in pulse oximeters.”

“Our findings may help motivate pulse oximeter manufacturers to improve their devices by conducting larger studies that include more Black and Hispanic patients,” said Levin.

He pointed out that the large sample size is a strength of the study, but he also acknowledged that the retrospective design introduced limitations.

“We don’t know the exact circumstances surrounding the measurements taken,” he said. “Also, we don’t have an absolute measure of skin pigmentation. Skin color varies widely among Blacks and Hispanics, and we used patient self-reported race and ethnicity as a proxy for skin color.”

Levin and colleagues plan to continue their research.

The study received no outside funding. The authors and Argento have disclosed no relevant financial relationships.

FDA Approves Qsymia for Treating Teens With Obesity
Nordic Walking Bests Other Workouts on Functional Outcome in CVD
Putting Phone In Silent Mode May Actually Increase Stress: Study
‘Many Doctors Are Involved in These Schemes’: What We Heard This Week
Government update on the Clinical Research Vision: More needed to go beyond recovery?