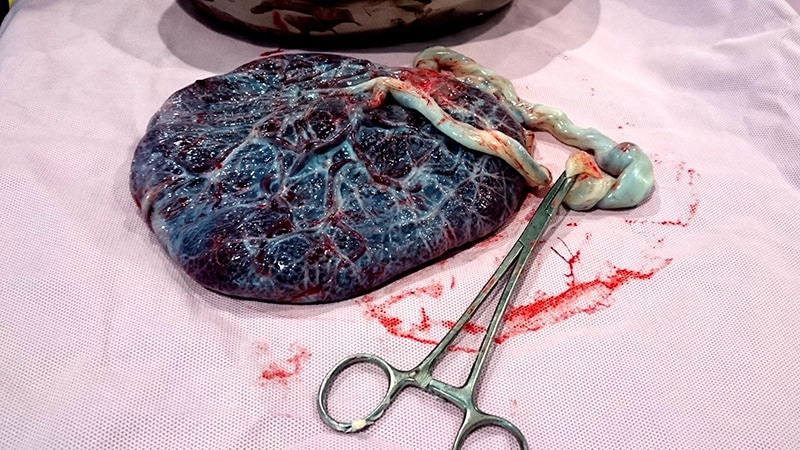 Researchers in Italy have identified microplastic (MP) fragments in four human placentas that were donated for study after delivery.

“The presence of MPs in the placenta tissue requires the reconsideration of the immunological mechanism of self-tolerance,” wrote Antonio Ragusa, MD, of San Giovanni Calibita Fatebenefratelli Hospital, Rome, and colleagues. “Placenta represents the interface between the fetus and the environment.”

In a pilot observational study published in Environment International, the researchers used Raman microspectroscopy to analyze placentas from six women with physiological pregnancies for the presence of MPs. MPs were defined as particles smaller than 5 mm resulting from the degradation of plastic in the environment, such as plastic objects, coatings, adhesives, paints, and personal care products. Data from previous studies have shown that MPs can move into living organisms, but this study is the first to identify MPs in human placentas, the researchers said.

A total of 12 microplastic fragments were identified in tissue from the placentas of four women; 5 in the fetal side, 4 in the maternal side, and 3 in the chorioamniotic membranes, which suggests that MPs can reach all levels of placental tissue, the researchers said. Most of the MPs were approximately 10 mcm in size, but two were roughly 5 mcm.

All 12 of the MPs were pigmented; of these, 3 were identified as stained polypropylene and the other 9 contained pigments used in a variety of items including coatings, paints, adhesives, plasters, finger paints, polymers and cosmetics, and personal care products. The researchers used a software program to analyze the pigments and matched them with information from the European Chemical Agency for identification of the commercial name, chemical formula, International Union of Pure and Applied Chemistry name, and Color Index Constitution Number.

The mechanism by which MPs may enter the bloodstream and access the placenta remains unclear, the researchers said. “The most probable transport route for MPs is a mechanism of particle uptake and translocation, already described for the internalization from the gastrointestinal tract. Once MPs have reached the maternal surface of the placenta, as other exogenous materials, they can invade the tissue in depth by several transport mechanisms, both active and passive, that are not clearly understood yet.”

The range in location and characteristics of the particles found in the study suggest that passage of MPs into the placenta may be affected by physiological conditions and genetics, as well as food and lifestyle habits of the patients, the researchers said.

The study findings were limited by several factors including the small sample size and observational study design.

However, the presence of MPs in the placenta could affect the pregnancy in various ways, including immunity, growth factor signaling, maternal-fetal communication, and trafficking of various cell types and macrophages, the researchers wrote. In addition, MPs could have a transgenerational effect on metabolism and reproduction.

“Further studies need to be performed to assess if the presence of MPs in human placenta may trigger immune responses or may lead to the release of toxic contaminants, resulting harmful for pregnancy,” they concluded.

Cause for Concern, but Research Gaps Remain

“Microplastics are ubiquitous in the environment and are detectable in tissues of humans and wildlife,” Andrea C. Gore, PhD, of the University of Texas, Austin, said in an interview. “To my knowledge, this was never previously shown in the placenta.

“There are two reasons why detection of microplastics in placenta would be concerning,” Gore explained. “First, microplastics may be endocrine-disrupting chemicals (EDCs), or they may concentrate other chemicals that are EDCs. Second, the developing fetus is exquisitely sensitive to natural hormones, and disruptions by EDCs may lead to both immediate as well as latent health problems.

“Clinicians should be concerned about particulate matter in the placenta, “although the number of particles was very small,” said Gore. “Out of six women, four had particles in their placentas (total of 12) of which one was confirmed to be a plastic (polypropylene). For the other 11 particles, only the pigments could be identified, so more work is needed to confirm whether they were plastics.

“If I were a clinician discussing this article with my patients, I would point out that, although it is concerning that microparticles are present in placenta, few of them were found, and it is not known whether any chemical is released from the particles or actually reaches the fetal circulation,” Gore said. “I would use it as a starting point for a conversation about lifestyle during pregnancy and encouraging pregnant women to avoid eating foods stored and/or prepared in plastics.”

The limitations of the study include not only the small sample size, but also that “the type of chemicals in the microplastics is for the most part unknown, making it difficult to assess which (if any) might be EDCs,” Gore emphasized. In addition, “lifestyle and diet can greatly affect exposures to chemicals, so this needs to be carefully factored into the analysis.” Also, “most of the detected particles are pigments, so connections to plastics (other than the one polypropylene particle) need to be strengthened,” she explained.

“The pathways by which microplastics might get into tissues are still rather speculative, and the mechanisms proposed by the authors (endocytosis, paracellular diffusion, entry via airways) need to be demonstrated,” Gore concluded.