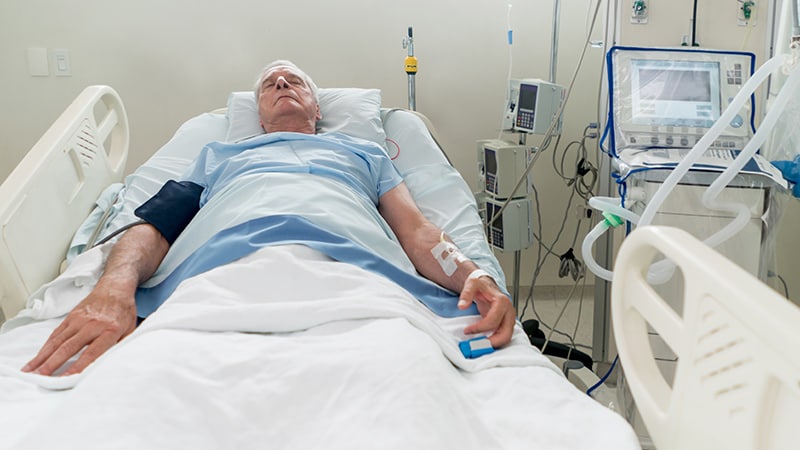 In patients with a median age of 66 years who had received a donor transplant, the overall survival (OS) at 3 years was almost double compared with patients who did not receive a transplant — 47.9% vs 26.6% for the “no donor” group.

Coauthor Ryotaro Nakamura, MD, from the City of Hope, Duarte, California, told Medscape Medical News that this was the largest and first trial in the United States to determine in a prospective fashion that allogeneic stem cell transplantation offers a significant survival in older patients. “There was more than a 20% benefit in OS in this age group,” he said.

“This is an incredibly important study,” said Andrew Brunner, MD, medical oncologist at the Mass General Cancer Center in Boston, Massachusetts, who was approached for comment. He explained that for years early transplant was recommended as important for patients who have higher-risk MDS. “This study validates this in a prospective, pseudo-randomized (donor/no donor) fashion,” he told Medscape Medical News.

“[This study] is really a seminal advance in the care of patients with MDS. Transplant should be integrated into the care algorithm, if not already, and we as a community need to build upon this study further,” Brunner added.

Several experts in addition to the authors hailed the study as practice changing.

Robert A. Brodsky, MD, ASH, director of the division of hematology at Johns Hopkins School of Medicine, Baltimore, Maryland, noted that in younger patients bone marrow transplant is the standard of care for aggressive MDS, but a lot of practices do not refer older patients or those with comorbidities for transplant and prefer to give these patients palliative care with hypomethylating agents for fear that the transplant process would be too toxic.

“There has been an institutional bias to do transplant in older patients, but until now there was no randomized clinical trial to show that this is the right choice. Now we have the data,” Brodsky said, predicting that “this study will change the standard of care”

Henry Fung, MD, chair of the Department of Bone Marrow Transplant and Cellular Therapies at Fox Chase Cancer Center, Philadelphia, Pennsylvania, agreed. “We should congratulate all the investigators and our patients who participate in this study. Reduced intensity allogeneic stem cell transplantation improved disease control and overall survival with similar quality of life.”

“I will recommend all patients with intermediate-2 or higher risk MDS to be evaluated by the transplant team at diagnosis and eligible patients should be considered for a transplant,” Fung told Medscape Medical News.

Lead author Cutler suggested that the study results had an immediate impact for changing clinical practice. “Individuals between the ages of 50 and 75 years with intermediate-2 or high risk MDS who are eligible to undergo reduced-intensity transplantation had superior outcomes if they had a suitable donor for transplantation in comparison with those who did not have a donor,” he said.

“Transplant is curative for MDS,” he emphasized. Most transplant recipients will eventually become transfusion-independent within weeks to months from transplant.

“We do transplants in this age group all the time,” Cutler noted. He said that academic centers will continue to offer transplants, and suggested that community oncologists encourage referral to transplant centers early in a patient’s disease course in order to maximize search time and provide patients all potential options for therapy.

Brunner agreed and noted that there is a need to build capacity for higher transplant volume, and in general physicians should seek ways to expand this treatment option to more patients. “At this time, allogeneic transplant still requires close collaboration with referral centers; that said, more and more we are able to work closely with colleagues in the community to share management, including earlier after the actual transplant,” he said.

He noted that one silver lining of the pandemic in 2020 has been increased use of telemedicine to collaborate. “Ongoing advances may be able to further encourage these virtual connections to enhance the entire patient care experience,” Brunner said.

Reimbursement by CMS for Medicare Recipients

Despite the data showing benefit, allogeneic stem cell transplantation is not offered to older individuals with high-risk MDS and is not covered by Medicare in the United States, Cutler noted in his presentation.

“This study was spurred by the CMS [Centers for Medicare & Medicaid Services] ruling for transplantation in MDS and the story has come full circle,” Aaron T. Gerds, MD, MS, noted at a preconference press briefing. Gerds is chair of the ASH Committee on Communications and assistant professor at the Cleveland Clinic Taussig Cancer Institute, Cleveland, Ohio.

Nakamura explained that in 2010 a CMS decision memo noted that the evidence of a benefit for transplantation in MDS was lacking and Medicare would not cover transplant unless patients were enrolled in a clinical study. That memo outlined criteria that a clinical trial would have to address before it could consider reimbursement for Medicare beneficiaries.

“The BMT CTN Study 1102 was one of two studies that met the criteria set by CMS,” Nakamura said, noting that the data is being prepared for CMS review.

“This study will likely be the deciding factor for CMS to begin to cover payment for transplantation for MDS,” Corey told Medscape Medical News.

The other study, published earlier this year in JAMA Oncology (2020;6:486-493), showed that outcomes for patients older than ager 65 were shown to be similar to those between ages 55 and 65.

Cutler noted that the study was designed to address the issue whether transplantation was beneficial to Medicare-aged individuals with high-risk MDS, and the trial had been  approved by Medicare.

The multicenter study enrolled patients who were between age 50 to 75 years and had newly diagnosed MDS of higher risk (IPSS intermediate-2 or higher) and were candidates for reduced intensity conditioning (RIC) allogeneic HCT.

Patients were enrolled prior to a formal donor search and were initially assigned to the “no donor” group and reassigned to the donor group when a suitable donor (matched sibling or unrelated donor) was identified. Patients underwent RIC HCT according to institution protocol.

The two arms were well balanced with respect to age (median 66 years), gender, disease risk [two thirds of the patients had an intermediate-2 and one third had a high-risk MDS], and response to hypomethylating therapy. The majority of subjects in the donor arm had unrelated donors and more than one third had a high comorbidity score, Cutler indicated.

At 3 years, absolute improvement in OS was 21.3% in favor of donor-arm subjects. Leukemia-free survival was also higher in the donor group: 35.8% vs 20.6% for the no-donor group.

Improvement in OS for patients receiving transplants was seen across all patient subtypes, regardless of age, response to hypomethylating therapy, and IPSS score. “Treatment effects were seen in any subgroup, but particularly in subjects above age 65,” Cutler stressed.

Nakamura emphasized that the gains in survival benefits were not seen at the expense of quality of life, as preliminary results showed no difference in quality-of-life measures across those who received donor transplants and those who did not.

Brunner noted that physicians often highlight the toxicities of transplant as a consideration for whether to proceed, and while there are toxicities specific to transplant that should be considered, in this study it is seen that, even early on, survival is improved in those patients who move toward early transplant. “It also underscores the limitations of current nontransplant treatments for MDS — there is much room to improve,” he said.

Cutler noted that the majority of patients in the no-donor group died without transplantation. “We need to establish the role of alternative donor transplantation in this population,” he said. Nakamura indicated that mismatched donors and haploidentical donors such as family donors and umbilical cord blood may be alternate donor sources; outcomes from published studies show similar results, he said.

However, Brunner noted that the study looked only at traditional fully matched donors, leaving open some questions about alternative donor options such as haploidentical donors and umbilical cord blood donation.

“Our experience in other areas of transplant would suggest that these donor sources may be as good as traditional fully matched options, when using newer conditioning and prophylaxis regimens,” Brunner said. Cutler added, “With the increased acceptance of alternate transplant modalities, we need to determine the outcomes associated with these in prospective trials.”

“I think a significant consideration here as well is health equity. Donor options vary according to race and ethnicity and we need to be proactive as a community to ensure that all MDS patients have access to a potentially curative option early in their diagnosis,” Brunner told Medscape Medical News.