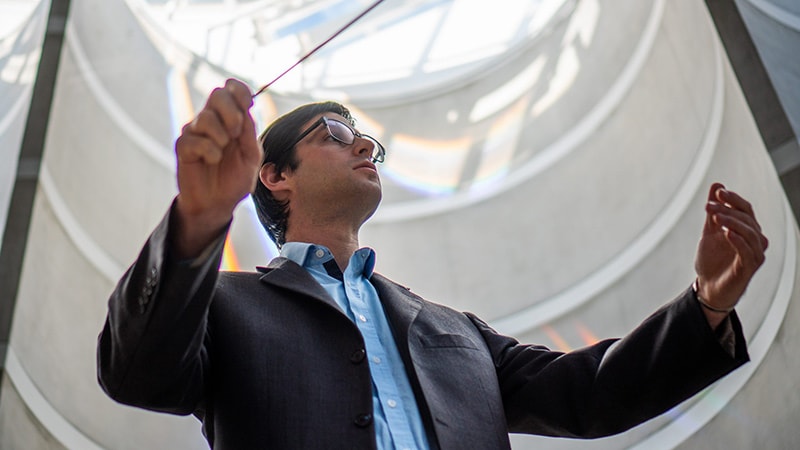 “My parents were both doctors,” he said. “They taught me a fair amount about how the medical world works, enough to know I did not want to go into medicine myself but to give me a profound appreciation for it.”

Soon after the pandemic started, Masko started to hear from medical orchestra members who were desperate to get back to playing music at one of the most stressful times in their careers.

So, with the help of Richard Logothetis, manager of the Wellesley Symphony Orchestra, he reached out to see if any other medical orchestras were interested in collaborating. With a few members from each of those groups, the National Virtual Medical Orchestra was born.

Musicians rehearse on their own, with a recorded track that coordinates the tempo.

Once they are ready, the musicians are recorded and filmed individually, and then audio and video engineers put the whole thing together in an impressive montage that is streamed on the medical orchestra’s page on YouTube. The group has so far recorded six pieces of music.

When Welborn was asked to perform the aria — first with the local Virginia Commonwealth University (VCU) Health Orchestra when a tenor friend called in sick, and then with the National Virtual Medical Orchestra — he was “dumfounded” to discover just how many of his peers in healthcare were also musicians.

But, he added, it makes sense. The best caregivers are the ones who are able to connect on an emotional level, and “making an emotional connection is part of performing.” For him, both medicine and music are “all about feelings.”

Before becoming a nurse, Welborn studied math, then music, and performed professionally for about 15 years. He embarked on a career in healthcare because he wanted to feel like he “was helping someone else.”

Music has a way of opening the mind and creating avenues to learn and be inspired, Welborn said. And there is a difference between singing with professional orchestras and medical orchestras, he added.

“Knowing that these folks are doing it out of love, not as a job, is really inspiring,” he added. “In a lot of ways, it’s much more rewarding for that reason.”

For some healthcare workers, the medical orchestra has provided a welcome respite from the pandemic. Danielle Portz, RN, has been working with COVID-19 patients longer than most of her colleagues across the country. In February, she was part of the medical team at the Nebraska Medicine Biocontainment Unit that monitored American cruise-ship passengers who had been exposed to — and in some case fallen ill with — the virus.

“It has been really stressful,” said Portz, who now works nights in the emergency department at the University of Nebraska Medical Center in Omaha. “Pretty much everyone who comes in has COVID, including trauma patients and stroke patients. You turn around and there are acutely critically ill patients everywhere.”

The 23-year-old nurse started playing the violin in third grade and then switched to bass in middle school. She entered college on a music scholarship but also wanted to study healthcare. Luckily for her, the program she was in allowed her to do both. For the past 2 years, she has played bass with the Nebraska Medical Orchestra, and is now a member of the national medical orchestra.

“Music is almost an escape,” she said. “It gives you a moment to step away from everything that you are worried about in your life and focus on the music in front of you.”

For Portz, having a goal outside of work during the pandemic has also helped keep her grounded. “When every sense of normalcy is taken away, it’s good to know that I have to have things prepared because we are going to be recording,” she said.

Far from being an anomaly, it turns out that Portz is one of many healthcare workers who have been involved with music from a young age. Fellow orchestra member Ashlie Tseng, MD, a pediatrician at the Children’s Hospital of Richmond at VCU, has been playing violin since the fourth grade.

“Music was a huge part of my life growing up,” said Tseng, who gave private lessons to elementary school children when she was an adolescent and initially wanted to be a music teacher.

Despite changing her chosen profession, she has continued to play music. She played weddings while in college and joined the VCU Health Orchestra as a busy pediatrician.

For her, music and medicine are complementary.

“There are technical aspects to both music and medicine,” said Tseng. “But the other part of medicine that goes well with music is the emotional piece.” So much of what makes a piece of music resonate “is the emotion you feel when you hear or play a piece.”

Orchestra member Lisa Wong, MD, is a pediatrician and assistant codirector of the Arts and Humanities Initiative at Harvard Medical School; she’s also a violinist, violist, and pianist who has spent years thinking about the relation between music and medicine.

“They have been connected for all of history,” she said. “Apollo was god of the sun, but also god of healing and god of music.”

During the 20 years she served as president of the Longwood Symphony Orchestra in Boston, Wong became interested in why there were so many people like herself and Tseng who played music from a very young age but ended up in medicine.

In 2012, she wrote a book, Scales to Scalpels: Doctors Who Practice the Healing Arts of Music and Medicine, in collaboration with writer Robert Viagas.

“When a musician looks at a piece of music the notes are just dots on a page — a visual representation of an aural experience. Once analyzed, digested, and understood, and once the musician adds his or her own voice, experience, and creativity, those dots can miraculously transform into wrenchingly beautiful or heartbreakingly passionate music,” Wong writes in the foreword.

“As doctors, we similarly see that a medical diagnosis cannot come strictly from a set of lab tests or stack of x-rays,” she continues. “Medicine is as much an art as music: we incorporate knowledge of anatomy and physiology, add experience and creativity — and arrive at an elegant diagnosis that is unique to the patient.”

And, of course, playing music “is personally fulfilling,” said Wong. “Every time I play another symphony, I think this is such a privilege, such a pleasure to ‘own’ this piece of music.”

Music is not just part of her personal life; it is also incorporated in her work as a physician. She uses music in patient care and as a way to connect with her peers, and she also participates in concerts to raise money for and awareness of different medical causes.

“The thing I love the most is when we play for a purpose,” said Wong. “Knowing that you are doing it for someone else is deeply satisfying.”

And, when a medical orchestra is playing for a cause, “you can feel a change in the orchestra’s demeanor,” she said. “You can literally hear the difference.”

It’s because, she explained, both as healthcare workers and as musicians, “it’s in our nature to want to help.”

The ultimate guide to establishing healthy relationship boundaries
‘We need vaccines, and we need them yesterday’: Frustration builds in LGBTQ community over government response to monkeypox
Guide: How to Find LGBTQ-Affirming Healthcare
Carbon monoxide foam in the fight against inflammation
Bacteria Behind Rare Disease Detected In US Soil ‘For The First Time’: CDC