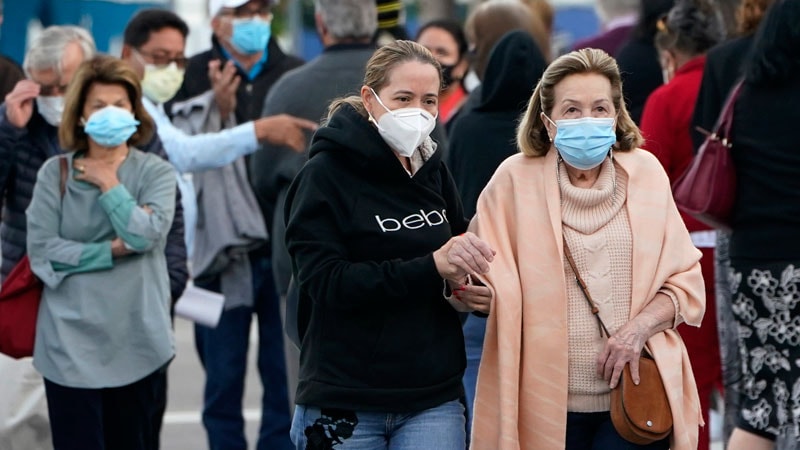 In this Jan. 6, 2021, file photo, people arrive at Jackson Memorial Hospital to receive the COVID-19 vaccine in Miami. With frustration rising over the slow rollout of the vaccine, state leaders and other politicians are turning up the pressure, improvising and seeking to bend the rules to get shots in arms more quickly.

New York’s governor threatened to fine hospitals if they don’t use their allotment of COVID-19 vaccine fast enough. His South Carolina counterpart warned health care workers they have until Jan. 15 to get a shot or move to the back of the line. California’s governor wants to use dentists to vaccinate people.

With frustration rising over the sluggish rollout of the vaccine, state leaders and other politicians around the U.S. are turning up the pressure, improvising and seeking to bend the rules to get shots in arms more quickly.

Meanwhile, U.S. Health and Human Services Secretary Alex Azar said Wednesday that the government will allow more drugstores to start giving vaccinations to speed up the process. If health workers aren’t lining up fast enough, he said, it is OK to expand eligibility to lower-priority groups.

“We need to not be overly prescriptive in that, especially as we see governors who are leaving vaccines sitting in freezers rather than getting it out into people’s arms,” he said.

As of Wednesday, more than three weeks into the U.S. vaccination campaign, 5.3 million people had gotten their first shot out of the 17 million doses distributed so far, according to the Centers for Disease Control and Prevention. While that is believed to an undercount because of a lag in reporting, health officials are still well behind where they wanted to be.

The slow rollout has been blamed on a multitude of problems, including a lack of funding and direction from Washington, mismatches between supply and demand, a patchwork of approaches by state and local governments, distrust of the vaccine, and disarray created by the holidays.

Across much of the nation, health care workers and nursing home residents are being given priority for the initial, limited supplies of the vaccine at this stage. But pressure is building to let other groups step up. Louisiana began vaccinating older people Monday, while Alaska and Mississippi have given the OK for the elderly to start receiving shots over the next few days. Michigan will begin giving vaccines to seniors and front-line workers such as teachers and police next week,

The U.S. has an estimated 21 million health care workers and 3 million residents of nursing homes and other long-term care centers. The CDC said about 512,000 people in such centers have been vaccinated through a partnership between the government and the CVS and Walgreens drugstore chains.

Government officials over the past few days reported that the number of people receiving shots has accelerated to about a half-million a day, and Dr. Anthony Fauci, the nation’s top infectious disease expert, said the pace could soon reach 1 million or more.

Fauci estimated that between 70% and 85% of the U.S. population will ultimately need to be vaccinated to achieve “herd immunity,” a goal he said could be achieved by the start of next fall. That translates to as many as 280 million people.

Azar announced that in addition to the nursing home program, pharmacies from 19 chains will be allowed to help now with dispensing shots to ease pressure on hospitals, which have been the main vaccine providers so far. More than 40,000 drugstores will eventually be involved, he said.

The pharmacies will still have to follow state guidelines for who gets in line first.

The U.S. death toll, meanwhile, climbed to around 360,000. COVID-19 deaths set another one-day record at 3,775 on Tuesday, though authorities have cautioned that the numbers around holidays can fluctuate dramatically because some health agencies fall behind in reporting cases, then catch up.

With cases and hospitalizations also soaring, politicians are getting aggressive in trying to accelerate the vaccination drive. The governors of California, Maryland and North Carolina said they will use the National Guard.

Maryland Gov. Larry Hogan warned, too, that any facility that has not administered at least 75% of its first doses may have future allocations reduced until they can speed up vaccinations.

While about 270,000 doses have been put directly in the hands of front-line vaccinators in the state over the last three weeks, Hogan said that only about 77,000 people had been inoculated as of Tuesday, or about 1.3% of the state’s population.

Gov. Henry McMaster of South Carolina warned that health care workers will lose their place in line if they don’t move quickly to get their shots. As of Monday, the state had given out less than half its initial allotment of the Pfizer vaccine to about 43,000 people.

In California, where just 1% of the population was reported vaccinated, Gov. Gavin Newsom said he wants to give providers the flexibility to give shots to people not on the priority list if doses are in danger of going to waste. He also wants to expand the pool of professionals dispensing shots.

The pace had been so slow in New York that Gov. Andrew Cuomo on Monday threatened to fine hospitals up to $100,000 if they don’t finish their first round of inoculations by the end of the week. He also threatened to stop sending the vaccine to hospitals that don’t use their share promptly.

“Move it quickly. We’re serious,” Cuomo warned. “If you don’t want to be fined, just don’t participate in the program. It’s not a mandatory program.”

The delays prompted New York City Mayor Bill de Blasio to call for eligibility to be expanded, and on Wednesday he announced a plan to provide shots to 10,000 of the city’s police officers by Sunday.

But Cuomo immediately shot down that idea, saying, “We need to get the health care population done first because they are the front line.”