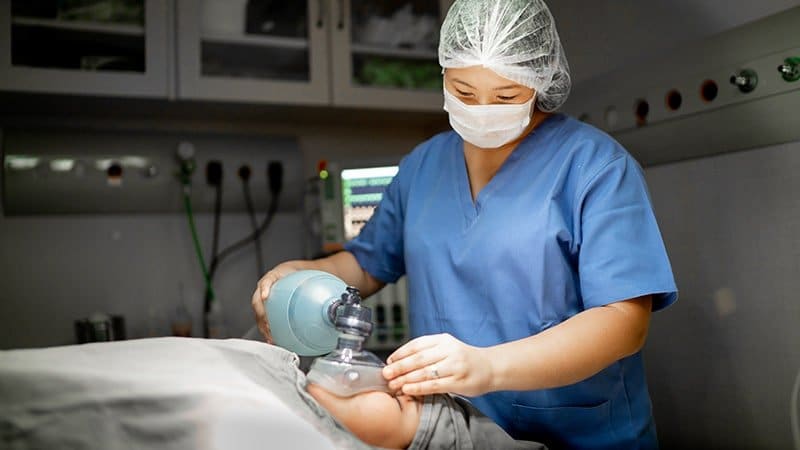 The battle lines between anesthesiologists and nurse anesthetists are being drawn even sharper as both sides respond to the possibility that Medicare will allow the latter to continue practicing without physician supervision after the pandemic ends.

In a request for information posted to the Federal Register on November 25, the Centers for Medicare and Medicaid Services (CMS) sought comments on whether a temporary waiver of the supervision requirements for certified registered nurse anesthetists (CRNAs), adopted last March, should be made permanent after the public health emergency is over.

The American Society of Anesthesiologists (ASA), in a news release aimed at the public, strongly opposed the idea of continuing the waiver. Contending that the temporary waiver “removed physician anesthesiologists from anesthesia care and replaced them with nurses,” the society said it “urges Americans to protect older patients and those with disabilities by posting a comment to the Federal Register asking the Centers for Medicare and Medicaid Services (CMS) to rescind the temporary policy that lowers the standard of care and risks patients’ lives.”

The release supplies a link to an advocacy pamphlet with a button that takes visitors directly to the Federal Register’s comment section. The comments are due before the end of December.

“Even more so during COVID-19, Medicare needs to keep policies in the best interest of patient safety, and that does not include replacing physicians with nurses for anesthesia care,” said ASA President Beverly K. Philip, MD, in the news release. “We’re proud to be on the front lines combating the pandemic and working collaboratively in a team-based model with nurse anesthetists and other healthcare professionals. Older patients who have had or are infected with COVID-19 are some of the most complex and challenging cases a physician will see in their career. Now is not the time to take the physician away from patients.”

The core of the ASA’s argument is that surgical anesthesia is inherently dangerous and therefore requires physician involvement, especially for patients who are at greater risk for complications.

CMS’ temporary waiver of the supervision requirements was based on the expectation that there would be a shortage of anesthesiologists because of COVID-19, Philip told Medscape Medical News. But that turned out not to be the case, she said, because many elective surgeries were canceled because of the pandemic.

In response to the ASA’s argument that replacing anesthesiologists with nurse anesthetists endangers patients, Moore said, “Their tactic is to stoke fear and obfuscation to try to prevent the modernization of anesthesia care. I say to them, ‘show us the evidence.’ Because we have a mountain of evidence that shows otherwise. Nurse anesthetists have been providing care in this country for over 100 years.”

Nurse anesthetists practice in every state, the armed forces, and the Department of Veterans Affairs system, Moore noted. In fact, he said, “the vast majority of anesthesia care in rural, underserved areas is provided by nurse anesthetists without the presence of an anesthesiologist.”

While the ASA asserted that 45 states require physician supervision of CRNAs, “there are 18 states where governors have opted out of this [CMS] requirement,” Moore said. “Those opt-outs started in 2001. So we have a 19-year-plus track record in 18 states of favorable data to substantiate making this a nationwide program.… At the end of the day, there’s no data to show that anesthesiologists have better outcomes.”

The ASA sent Medscape Medical News the documents to which Philip referred. A 2014 Department of Veterans Affairs “evidence brief” on the quality of care provided by advanced practice registered nurses (APRNs) noted that studies showed no difference between the mortality rates of anesthesiologists and CRNAs. However, the brief stated, there was insufficient evidence to support this or to support claims that APRNs provide the same quality of care as doctors.

The ASA also provided a study of intraoperative nonroutine events. This paper used 20-year-old data at three academic hospitals to describe the characteristics of these events, which are often associated with patient harm. Common contributory factors were related to the patient and the anesthesia provider, the study said; the “provider type,” however, referred chiefly to residents early in their training.

The real difference between nurse anesthetists working alone and under the supervision of an anesthesiologist is seen when there’s a complication during a procedure, Philip emphasized. That’s why most states require a CRNA to work under the direction of some physician, even if it’s a surgeon, she said.

“The nurse anesthetists are great technically,” she noted. “What the physician provides is the ability to diagnose medical problems and recommend treatments.”

How CRNAs Are Trained

While not disputing the ASA’s point about CRNAs having less training than their physician counterparts, Moore said that he had received more than 9000 hours of clinical training.

All nurse anesthetists, he continued, have 4 years of nursing education. After they get their nursing BA degree, they work in critical care for an average of 2.5 years before going into a 3-year CRNA program that combines clinical and didactic education.

Moore reacted sharply to the ASA’s claim that the CMS’ temporary waiver had proved unnecessary because there was never a shortage of anesthesiologists.

“CMS correctly identified there was going to be a surge of critically ill patients that would require all hands on deck from experts in anesthesia care,” he said. “So removing those barriers afforded the ability for nurse anesthetists on COVID response teams to practice in ICUs, taking care of sick patients.”

Because of the pressure of COVID-19 on hospital capacity, he noted, both nurse anesthetists and anesthesiologists have been “redeployed in COVID-response positions. They’re intubating patients, they’re managing their ventilators, they’re taking care of patients’ critical care needs. And this is everywhere.”

In Philip’s view, the AANA’s real goal is to have CRNAs replace anesthesiologists. “That’s what they’re asking CMS to do,” she said. “They want to work with no anesthesiologist present. We are in support of team-based care, which is the dominant practice model in the US.”

“The ASA is not against nurse anesthetists,” she added. “They are valuable members of the care team. I work with them, and so do most of my colleagues. They contribute to the safety of the patient, according to their education and training.”

Is the ASA concerned that if nurse anesthetists no longer have to be supervised by a physician, anesthesiologists will be devalued?

“No,” she replied. “We are very concerned [about a permanent waiver], but the reason we’re concerned is that we really think that every citizen deserves the very best anesthesia care. And that includes the modern concept of a physician-led care team model.”

How to set boundaries with emotionally draining friends
Pregnancy Brain Is Real, Says Study. Here’s The Surpring Reason Behind The Phenomenon
ECFMG 2024 Update | What Does This Mean for IMGs & FMGs?
Man Hospitalized For 453 Days Due To COVID, Returns Home For Holidays
Heart Disease Deaths Spiked During COVID After 10-Year Decline