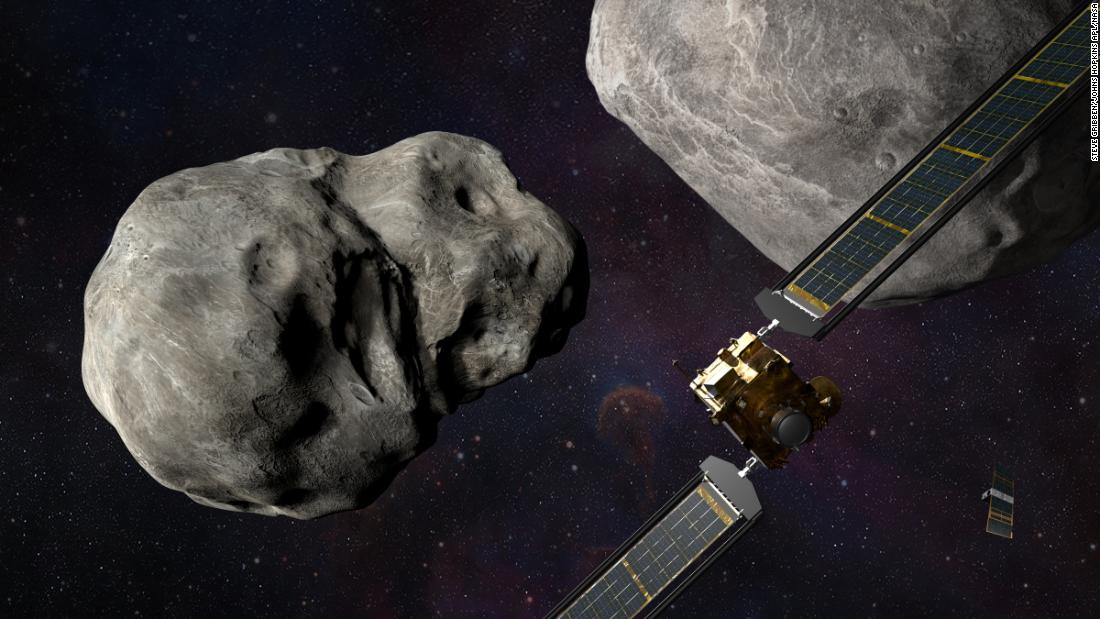 Health, Fitness & Food
Share on Facebook
Share on Twitter
Share on Pinterest
Share on LinkedIn
Sign up for CNN’s Wonder Theory science newsletter. Explore the universe with news on fascinating discoveries, scientific advancements and more.
It’s a test of deflection technology that could one day be used to protect Earth if a space rock is determined to be on an impact trajectory with our planet. Currently, there are no asteroids (Didymos and Dimorphos included) that are expected to hit our world.
Here’s what to expect on the day of the event.
A live broadcast will kick off on NASA’s website beginning at 6 p.m. ET Monday, and it will last until 7:30 p.m. ET. Then, the space agency will hold a post-event briefing to discuss what happened.
The DART spacecraft is carrying an imager called DRACO, short for Didymos Reconnaissance and Asteroid Camera for Optical navigation, that will share a live stream of images as it nears the double-asteroid system. Those images will be shared at a rate of one per second, providing a video-like experience for viewers.
What starts as 1 pixel will eventually become an incredibly detailed look at Dimorphos before DART slams into it.
Humans have never actually seen Dimorphos before because the asteroid system just appears as a single point of light in ground-based telescopes.
In the final hour of approach, Dimorphos and Didymos will come into view. The pinpricks of light will sharpen, revealing the two separate celestial bodies. Scientists will finally be able to ascertain Dimorphos’ shape, as well as if its surface is rough or smooth.
“Our last image is probably going to be from about two and a half seconds prior to impact, so the DRACO field of view is actually going to be completely filled with this beautiful image of Dimorphos,” said Elena Adams, DART mission systems engineer at the Johns Hopkins University Applied Physics Laboratory in Laurel, Maryland.
On the broadcast, expect to hear that the team has lost radio contact with DART. Images will continue to come through and be displayed for about eight seconds afterward as they travel through space to Earth, said Edward Reynolds, DART project manager at the Applied Physics Lab.
Also on the journey is the Italian Space Agency’s Light Italian CubeSat for Imaging of Asteroids, or LICIACube. This briefcase-size CubeSat hitched a ride with DART to space and detached from the spacecraft on September 11.
On the CubeSat are two cameras called LUKE (LICIACube Unit Key Explorer) and LEIA (LICIACube Explorer Imaging for Asteroid). Together, they will collect images and help guide LICIACube on its journey.
The little satellite travels at a safe distance behind DART to record what happens.
Three minutes after impact, LICIACube will fly by Dimorphos to capture images and video of the impact plume as it sprays up off the asteroid and maybe even spy the crater it could leave behind. The mini satellite will also glimpse Dimorphos’ opposite hemisphere, which DART won’t get to see before it’s obliterated.
The CubeSat will turn to keep its cameras pointed at Dimorphos as it flies by. Days, weeks and months after, we’ll see images and video captured by the Italian satellite that observed the collision event.
The first images expected back from LICIACube could show the moment of impact and the plume it creates.

While the engineering team expects to celebrate a successful impact, astronomers will know that it’s time to get to work, said Tom Statler, NASA DART program scientist. Ground-based observatories around the world will be observing the asteroid system as a way to confirm if DART successfully changed the asteroid’s motion.
The James Webb Space Telescope, the Hubble Space Telescope and NASA’s Lucy mission will also observe the aftermath. The images they collect could reveal an overall brightening of the whole asteroid system, indicating how much dust and debris was kicked up by the impact, Statler said.
Astronomers will use telescopes on Earth to compare previous observations of the system with those they collect after the event.
Currently, it takes Dimorphos 11 hours and 55 minutes to complete one orbit around Didymos. After DART’s impact, that could shrink by 10 minutes — something that can be measured by telescopes on Earth — and ultimately show whether DART was successful.
And don’t expect to see the last of this asteroid system in 2022.
To survey the aftermath of the impact, the European Space Agency’s Hera mission will launch in 2024, and we can expect even more dramatic imagery of the aftermath then.
The spacecraft, along with two CubeSats, will arrive at the asteroid system in 2026, about four years after DART completes its mission. Once there, Hera will study both asteroids, measure physical properties of Dimorphos, and examine the DART impact crater and the moon’s orbit, continuing with the overall aim of establishing an effective planetary defense strategy.
This article was originally published by Cnn.com. Read the original article here.
Share on Facebook
Share on Twitter
Share on Pinterest
Share on LinkedIn

Study reveals a wide variation in the water needs of people around the globe
Mainland China’s total daily Covid cases soar above Shanghai lockdown highs
What’s A Green Mediterranean Diet? It May Help Reduce Harmful Visceral Fat
Can Virtual Nursing Save the Workforce?
What to eat when it’s ‘one of those days’