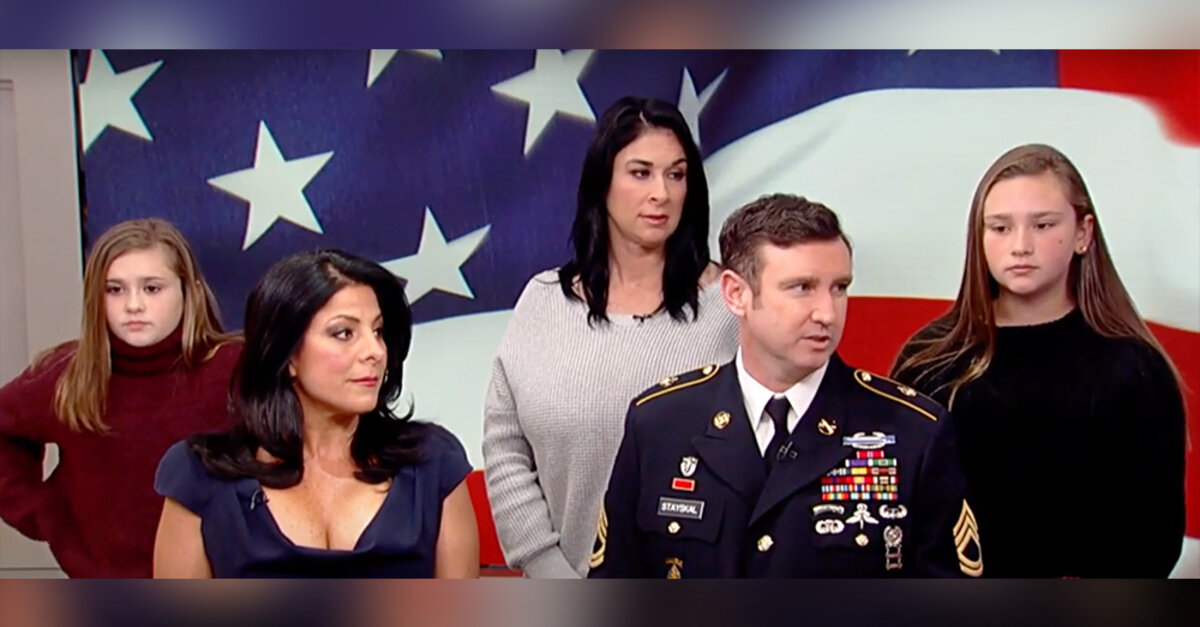 U.S. Army Sergeant First Class Richard Stayskal beams as he points to a paper heart stapled to a 2×4 in his home under construction. It’s one of hundreds of “thank you” notes and drawings sent to the service member from across Moore County, North Carolina.

“I don’t, usually, get too emotional about a lot of stuff, but you know, it’s something special when people across the country are reaching out to you,” Stayskal told ABC11.

The notes accompanied the mortgage-free home given to the Green Beret and his family through Operation FINALLY HOME, a national, non-profit organization dedicated to building homes for wounded, ill or injured veterans, and their families. It also marks a year since President Trump signed the Stayskal Act into law, making military members eligible for compensation when malpractice is committed in military facilities. Previously, the Feres doctrine prevented members of the military from suing for malpractice under any condition.

Stayskal suffers from stage IV lung cancer, which doctors at a military hospital misdiagnosed in 2018. He fought for more than a year to get the eponymous bill passed. As ABC11 reports, more than 100 claims have since been filed by service members and their families seeking compensation.

“If you got folks like myself are terminally ill, you’re planning for everything under the sun you know you got your family to look after your kids to look after,” Stayskal said. “They still have mortgages and bills and everything else piling up when you do, you know the unfortunate happens if you’re not around.”

“It’s very tense, to sit here patiently and think whoever’s doing all this has plenty of time but not all of us do,” he added.

Stayskal was joined by attorney Natalie Khawam and North Carolina Congressman Richard Hudson in advocating for the change to the Feres Doctrine. Even though the Stayskal Act has been made a law, their fight will continue until those who are owed compensation for malpractice are paid.

“I don’t understand how we could be here a year later and they feel like they don’t owe the soldiers, and more importantly Richard Stayskal, his compassion and his commitment to this bill, and answer or some kind of resolution or some kind of closure,” Khawam said. “We hope that maybe they’ll have some Christmas spirit or feeling of responsibility or accountability and say ‘Enough is enough. We’re going to start doing our job. We’re going to provide those people who deserve some closure some legal recourse.”

“They’ve committed. They served their part. They are fighting for our country, and I believe that it’s only fair to ask [the DOD] to do their job and get them the answers that they deserve,” Khawam continued.

As a Green Beret, Stayskal understands the high cost of war. He’s been trained to direct his talent and skill where it can make the biggest impact in winning a battle. Those traits are now helping him deal with a fight for his life

“Every day is a blessing. I wake up, definitely not without complications,” he said.

In the meantime, Stayskal has learned to appreciate the present moment. He has a place to live, family and friends, and hundreds of notes from others who care.

The video below shows the moment when Stayskal and his family were surprised with their new home from Operation FINALLY HOME.