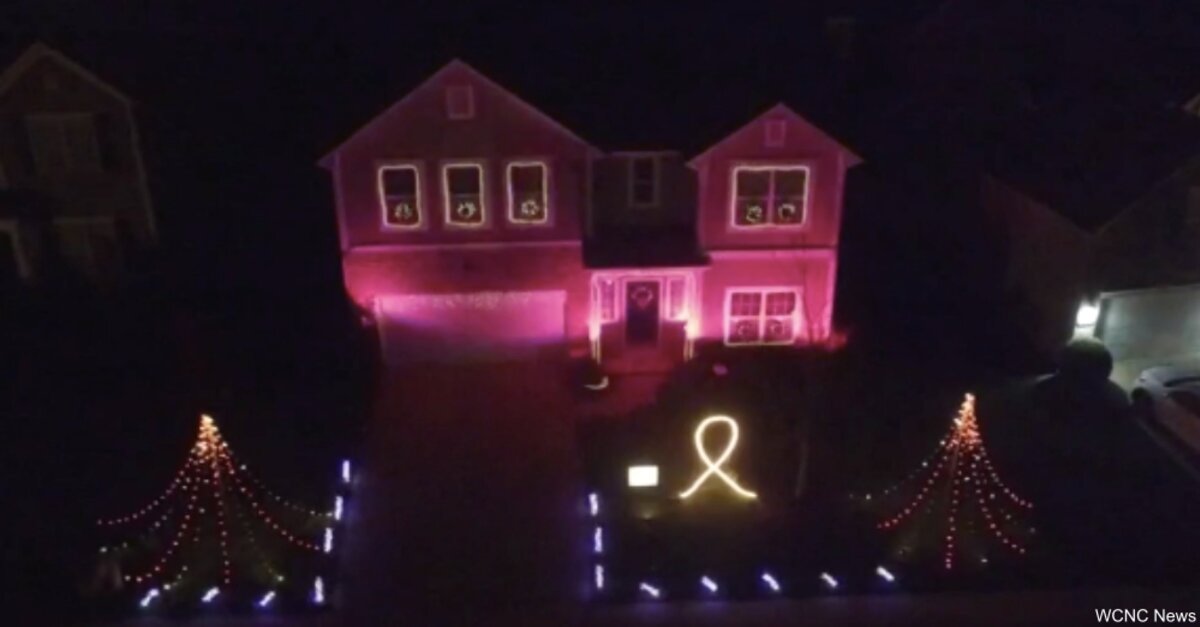 For the last decade, Daniel and Rosanna Christian have always put a lot of effort into their holiday decor. They create a different Christmas light and music show every year on the outside of their house on Winding Walk in Concord, North Carolina, with themes ranging from Star Wars to Harry Potter and beyond.

“All of the people you know, that come from everywhere to come and see our lights. It’s really a lot of fun just to bring that happiness,” says Rosanna.

But this year, Daniel decided his Christmas lights needed to be a tribute to his wife and everything she’s been through in the last year and a half.

“I was diagnosed in July of last year with triple-negative stage one breast cancer. It came as a shock,” says Rosanna. “I was 34, you know, pretty much the healthiest person you’d ever meet. And it just goes to show that cancer is not biased in any way. It can hit anyone at any moment.”

Rosanna underwent surgery, chemotherapy, and radiation therapy. It took several months of treatment to rid her body of the aggressive triple-negative cancer.

For Daniel, the worst part about his wife’s breast cancer was that he felt helpless and couldn’t do anything to save her from it. All the same, he was proud of her bravery and tenacity as she fought it off.

“All I did was sat there and watched her go through that. And I’d say, ‘You are my Wonder Woman. I mean, you’re going through some really deep valleys in your life. And you’re coming up so fast. And that, to me is the true definition of Wonder Woman,’” Daniel says.

So in honor of his wife’s battle and her new status as a breast cancer survivor, Daniel has decorated the house with pink lights this year and set the show to the tune of the Wonder Woman theme song.

“I’ve dedicated that song purely for my wife,” says Daniel.

Through this challenging journey, the Christian family has learned that there’s always something they can be thankful for, even when life isn’t going the way they expected or desired.

Check out the video below to hear more of the Christian family’s story and see their special holiday light show in action.

Study assesses the prevalence of gender-diverse youth in a rural region in Appalachia
Monkeypox is disproportionately affecting Black, Hispanic people, latest CDC breakdown shows
Assessment of replicon ribonucleic acid COVID-19 vaccine in nonhuman primates
Monoclonal antibody decreases asthma attacks by 27% in children and adolescents of color
Could There Be a Vaccine for Type 1 Diabetes?