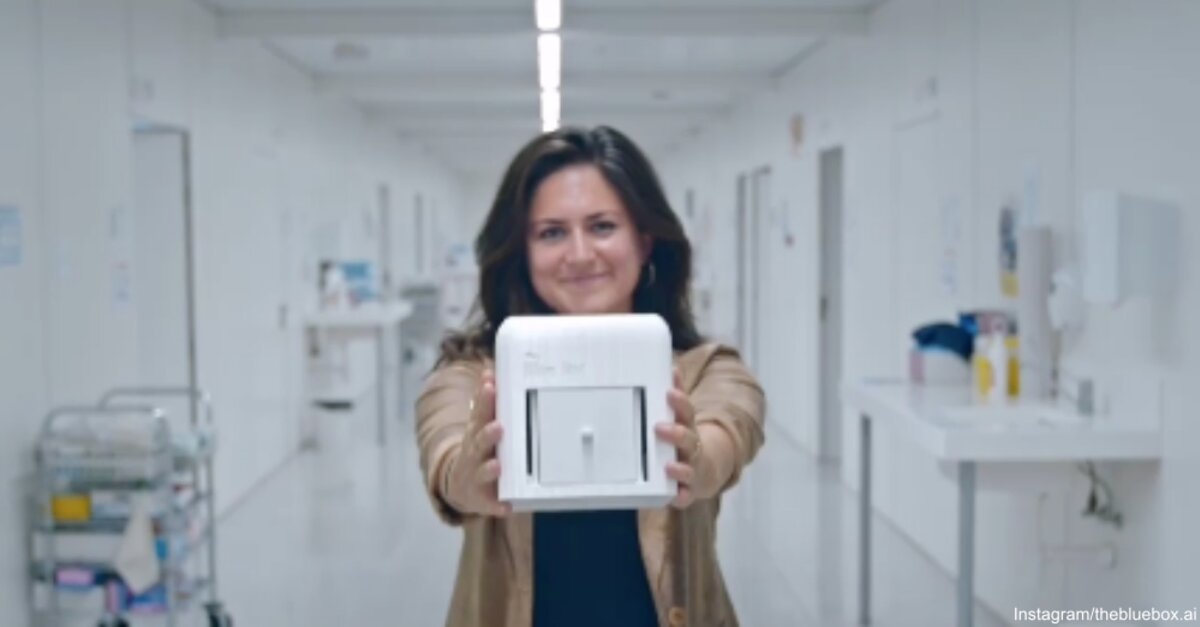 Judit Giró Benet, who was a biomedical engineering student at the University of Barcelona at the time, first got the idea for the Blue Box when she found out that nearly 40 percent of women skip their routine breast cancer screenings. About one-third of cancers are detected too late to be survived, so Judit knew that it was important to encourage people to get screened.

“The way I got inspired to start developing The Blue Box is [that] I heard there was a dog that could smell cancer and bark,” says Judit. “I really loved this approach because I always think that, to create great design, you should observe biology and then learn from that. So I thought, ‘Yeah, nature has a way to diagnose cancer already. Let’s try to copy it.’”

Judit was also disturbed by the fact that approximately 94 percent of breast cancers detected on mammograms turn out to be false alarms, as reported by the Catalan Department of Health in Spain. So Judit took her knowledge of nature and set to work creating a device that would increase people’s access to breast cancer screening and hopefully be more effective than traditional mammograms.

In 2017, during her final year at the university, Judit developed a prototype of the Blue Box as part of her bachelor thesis. She experimented with different sensors to detect breast cancer biomarkers in urine samples from a hospital. Her goal was to prove that “the metabolite analysis performed by The Blue Box is sufficiently significant to discriminate control from breast cancer class.”

“In the design process, there [were] some challenges,” Judit recalls. “There [are] some things…in the papers that have been published. You have to read those…and then you have to [figure out] after learning all of these [things] what hypothesis you have.”

Judit spent more time on her invention after graduation and then decided to dedicate her entire time as a master’s student studying embedded and cyber-physical systems at the University of California Irvine on developing a second prototype of the Blue Box. Another student with a background in computer science collaborated with her on the project.

“The reason I did this for my master’s is because I thought, ‘Okay, The Blue Box works, but it works for advanced breast cancer.’” Judit says. “So, for late-stage breast cancer, I want to optimize it. I want to make it better. How can I learn what I’m lacking?”

As the invention exists now, it contains six chemical sensors that react to different breast cancer biomarkers within urine samples. The device then sends a signal to a cloud, where an AI-powered algorithm generates a diagnosis and sends the results to the user’s phone. Judit says the box correctly classifies samples 95 percent of the time.

“I want The Blue Box to be a safe space for a community that unites women [who] have decided to take care of their own health,” she says. “Women have to prevent breast cancer, taking an active role together with their doctors.”

Judit was awarded the prestigious James Dyson Award — an honor given to students who tackle the world’s most pressing problems. She says the award increased her social media presence and got the word out about the Blue Box to women who might be able to use it. Currently, Judit is seeking funding so she can secure a patent and continue testing the device. After that, she hopes to get a government grant and FDA approval so the Blue Box can go on the market.

“There is a need for diseases or medical conditions that affect mostly women to be treated, to be investigated and to be solved,” says Judit. “And this is one of the goals of The Blue Box.”

We can’t wait to see this product hit the market. It could totally revolutionize the accessibility of breast cancer screening and make the process more comfortable for many women. Check out the video below to learn more.